Taking place on a custom stage at the world-famous Royal Albert Hall, the venue was lit by Sam Tozer of Vision Factory, using new generation fixtures from the GLP portfolio. These zipped into action around midnight on 19th March to light sets from the from body confidence guru turned celebrity DJ Gok Wan, Melvo Baptiste, and The Shapeshifters, while Teni Tinks joined the latter for a live PA.

The LD has been working with Mattie Smith’s production company Nocturnal Tour Management (NTRP) since the start of lockdown, handling the live YouTube streams. His brief here was to support the Glitterbox brand’s own particular style and feel.

“They support the LGBQ+ community, and the stage is packed with dancers, colour, and enjoyment,” Tozer said. “We had to create club intimacy down the camera lens, but at the same time turn it into a dynamic show. I was asked to design the set, production and lighting to meet this aesthetic, and from there I was given the freedom to create the show.

“Coming from a live performance background, lockdown shows have seen a big change in style of lighting and stage design,” he continued. “We wanted to show off the scale of the venue but at the same time create its own space that would be more familiar to Glitterbox audiences.”

Using the venue as a large catwalk, at the end of a centre room stage, which also incorporated the main stage, gave the director a new dynamic to pick up on. “Rather than utilise traditional rave/party lighting techniques, I wanted to place more emphasis on the set and dancers and allow the energy of the performance to be portrayed through the camera and director cuts,” he explained. 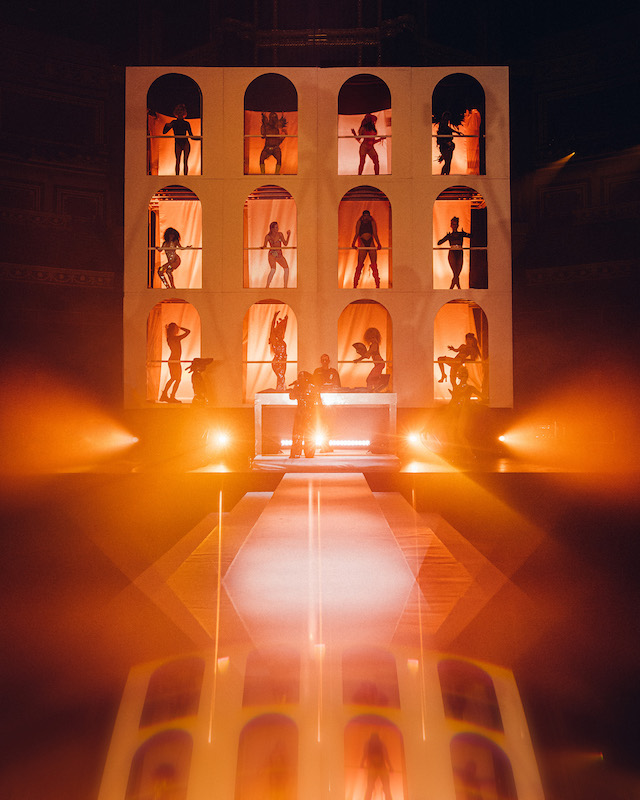 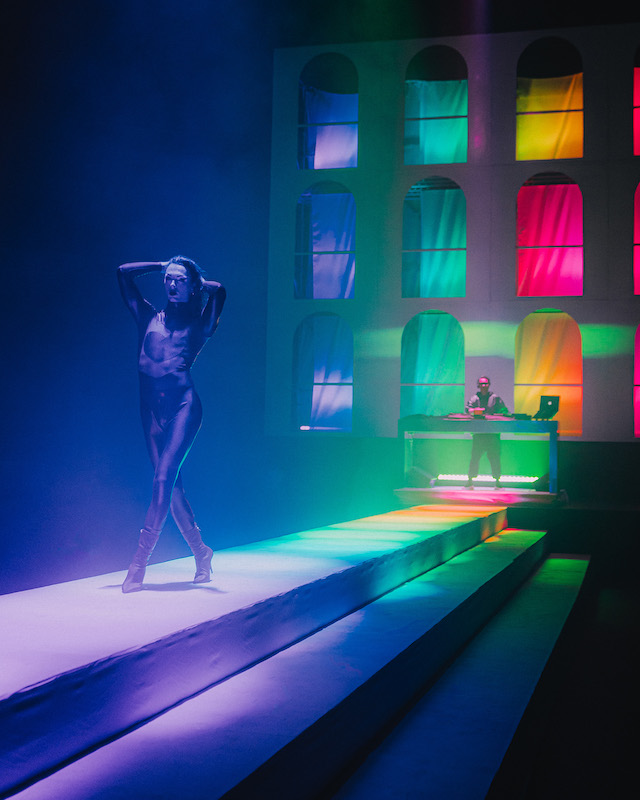 The GLP fixtures comfortably met all the broadcast requirements. “Ultimately they needed to deliver an even field of saturated colour, with intensity from certain directions to produce light around the architecture of the set.”

He had earlier sat down with Andy Strachan from vendor, Christie Lites, and top of the shopping list was GLP’s impression FR10 Bar—a fixture he would be using for the first time. He specified 19 pieces, which were all flown above the catwalk.

This batten contains 10 x 60W high output RGBW LED that colour-matches with the entire GLP X4 and FR series of fixtures. “I wanted this for its output and zoom,” said Tozer. “It played a major role on this show and I wasn’t going to compromise on it. With the trim heights on the trusses, I needed the extra degrees of zoom and output that we miss when using other products.”

In fact, he tasked his programmer Kris Goodman with creating gradients of colour on the catwalk. “And he achieved this via individual pixel control.”

Tozer also set some GLP JDC1 hybrid strobes at the feet of the catwalk. “This was pixel mapped in order to provide cam eye candy as well as low fill for both sides of the catwalk,” he said.

Both men piloted their own MA Lighting grandMA2 desks, with Kris Goodman running most of the show while Tozer took charge of key fills and kept the direction of the show moving.

Finally, the LD credits the support given by Christie Lites. “Andy worked his magic as usual, so that we pulled it off exactly to plan.”
His first outing with the powerful FR10 had been a complete success. “In fact we were able to make dynamic use of both GLP fixtures. They don’t just need to fulfil a solitary role; they are sufficiently versatile to enable me to quickly grab a light and use it for a completely different function. I also love the strength of output I get from both units.”

The Red Nose Rave was broadcast on Glitterbox’s YouTube feed and was also viewable via the Facebook Live.